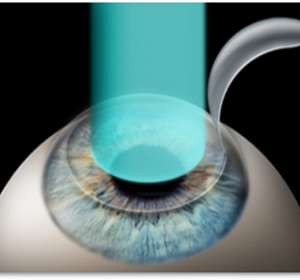 iLasik, the latest available Technology for exceptional results is now available at Vision Eye Centre. Over 15 Million Procedures have been done so far world over with proven results and still counting. Vision Eye Centre offers iLASIK  that is a combination of IntraLase and Advanced CustomVue Technologies and delivers highest level of customized laser vision correction, achieving results beyond 20/20 vision. iLasik Technology is used by NASA astronauts for laser vision correction, thus validating the safety, precision and highest level of performance of the procedure.

Worldwide more than 4 million procedures have been done using IntraLase Technology, thus making it a number one choice. This is a fully computer guided procedure, is 100% blade free and has replaced the mechanical motorized controlled flap by Microkeratome.

Comprehensive Eye Assessment using Wave Scan Wave Front System. The system captures 3-D map of unique irregularities of the eyes while the Iris Registration reads the specific characteristics of the iris using Intralase FS Laser to create Corneal Flaps. In the earlier system, a handheld microkeratome blade was used. The INTRALASE laser creates a more precise flap and is also safer method for the patient. This technique is replacing the traditional system of creating a flap by the mechanical device, Microkerotome that uses the blade technology. The IntraLase Femtosecond laser technology is world’s best and also the first fully bladeless laser technology for creation of flap.

Advanced CustomVue™ Laser Technology uses wavefront-guided technology to measure unique imperfections in the eye. The technology then creates a treatment plan for the eye and transmits to the laser. The information is used to fine-tune the procedure thereby providing a new level of precision and accuracy.

The CustomVue LASIK offers maximum comfort during the procedure, fast visual recovery, a better visual outcome and the best possible results compared to any other technology for LASIK.

The WaveScan System calculates an accurate, objective measurement of the patient’s entire optical system, including both higher- and lower-order aberrations. The measurements are 25 times more precise than standard measurements for glasses or contact lenses

A wavefront-guided treatment represents a higher level of customization compared to a wavefront-optimized LASIK treatment, which is only based on the eye’s refraction and K-readings. Such treatments are often called “standard,” “classic” and “traditional” LASIK.

The STAR S4 IR Excimer Laser and the WaveScan WaveFront System are approved by the FDA (U.S.A) for the broadest range of custom wavefront-guided laser vision correction procedures.